The messages below were all received in the days leading up to the celebration of 150th anniversary of the YC&AC rugby section on April 2 2016. The YC&AC can trace its history back to the founding of the Yokohama Foot Ball Club (YFBC) at a meeting that started at 2 pm on January 26 1866. Most of them were at least partially read out at the dinner party on April 2 2016. The messages  provide brief and unique glimpses  of rugby played in Japan, including by some key people connected with the YFBC, the YC&AC and Japanese rugby in general, during the last 150 years

1. From great-grandson of Lt. (later Col.) James Smyth of XXth Regt. who was in Yokohama and probably present when the Yokohama Foot Ball Club  was founded in 1866 – RICHARD NUGENT:

“Congratulations to the YC&AC on helping to keep rugby popular in Japan for 150 years. James Smyth of Gaybrook, Ireland, my great-grandfather, was a subaltern in the XX regiment in Yokohama from 1864 until 1867. Stationed on the Bluff, where the Yokohama International School now is, he was a keen sportsman and participated with the first players of football when he was not busy horse racing at Negishi. He may have attended the founding meeting. Richard Nugent.”

2. From granddaughter of George Hamilton, the Rugby School alumnus who captained the rugby club in 1870s & 1880s – MINA HAMILTON:

“Greetings from New York and many many congratulations on keeping rugby going in your club for 150 years. My grandfather George was captain of your club in 1870s and 1880s. He was a great, great athlete, as was my father who in his seventies regularly trounced 20-year-old youngsters who dared challenge him on the tennis court. I, too, seem to be gifted with this fiery, athletic gene, as I am still teaching challenging yoga classes at age 77. Some of my insights re yoga and life are in Serenity to Go: Calming Techniques for Your Hectic Life. This book has been published (and widely-read) in Japan too. Thank you Grand-Pop for the inspiration of your life.”

“I never knew my grandfather, George. My mother knew George, and thought the world of him. Anecdotally, my father told me many times that George had a talent in rugby: he could kick a drop goal running full tilt without a single misstep or change of pace! I close with the simple fact that I learned to play rugby when I was at McGill University in 1957… the family legend lives on!”

3. From grandson of George Hamilton, the Rugby School alumnus who captained the rugby club in 1870s & 1880s – KEN HAMILTON:

”We would like to congratulate Yokohama Football Club on becoming the first rugby club in Asia to celebrate 150 years since foundation. The club itself is testament to the spirit of those early pioneers who first established the game in Japan; and vigour with which the Japanese themselves have since adopted and made it their own. Here’s to the next 150 years of sporting friendship, fraternity and excellence”

5. From daughter of legendary Ross Tattam who was player at YC&AC in 1950s and 60s, then team manger & club president – DANIELLE TATTUM:

“Congratulations on your 150th rugby anniversary! My father, Ross Tattam (player, coach, manager, and also club president in period 1950s to 1980) would be very pleased at how far Rugby has come in Japan and that the YC&AC is still a leading

rugby club in Japan. Playing for the club and later encouraging all new male members to join the clubs’ rugby team, much to the chagrin of many wives and mothers. Rugby was my father’s

greatest passion and life blood. The YC&AC always held a special place in his heart. So, on behalf of my father, I would like to say again Congratulations .. it’s a great milestone!! And

“Sincere congratulations on having reached your 150th Anniversary and best wishes for your celebratory day on the 2nd April 2016.

I have fond memories of my first visit to the club as a member of the England XV that played there in 1971. If memory serves me correctly we were rather fortunate to win! I also remember the

tremendous hospitality offered to us by the club members at the time, it was fantastic and much appreciated. In the late 90’s I was fortunate enough to visit the club once more. By then I was master i/c rugby at Harrow School and we toured

Japan playing one of our games at the club. It provided another great example of why rugby is such a great game on and off the field. It also demonstrated the important role the club has played

in the development of the game in Japan and long may it continue to do so.”

7. From captain of England team during 1979 tour to Japan when YC&AC hosted a dinner in their honour and players performed a rendition of ‘Chattanooga Choo Choo’ – BILLY BEAUMONT

“Congratulations to the Yokohama Country & Athletic Club on its 150th Anniversary. I have very fond memories of visiting you in 1979 – including singing ‘Chattanooga Choo Choo’ with the England team! It is a great achievement to reach such a milestone anniversary and I wish you many more years of great sporting enjoyment to come.

8. From the first non-Japanese to play rugby as a  full-time employee of a Japanese company after touring Japan with Oxford University – REG CLARK (president of Rhino Rugby Ltd.)

“On behalf of myself and Rhino Rugby, I would like to congratulate all concerned today on staging this magnificent celebration of 150 years of rugby in Yokohama. Regarding the establishment of the Yokohama Foot Ball Club in 1866, which makes the YCAC the oldest rugby club in Asia, there is a historical circularity about this which is very satisfying – as far as Japan is concerned ‘Rugby Is Coming Home’. I would have loved to see the revived Interport game, having played for both sides in the 1980’s but principally for the KR&AC. Have a great day. Reg Clark”

9. From the chairman and the CEO of New Zealand Rugby – BRENT IMPEY & STEVE TEW:

“On behalf of New Zealand Rugby, we offer you and the Japan Rugby Football Union (JRFU) our most sincere congratulations on reaching the milestone of 150 years of rugby in Japan.

Japan has been an excellent rugby playing nation over those years, and certainly a worthy team to play against.

As we look forward to the Rugby World Cup in 2019, and appreciate the importance of that event to both the JRFU and Japan, we encourage the JRFU in its pursuit of rugby excellence and its string contribution to the rugby world.

Once again, congratulations on the achievement.” 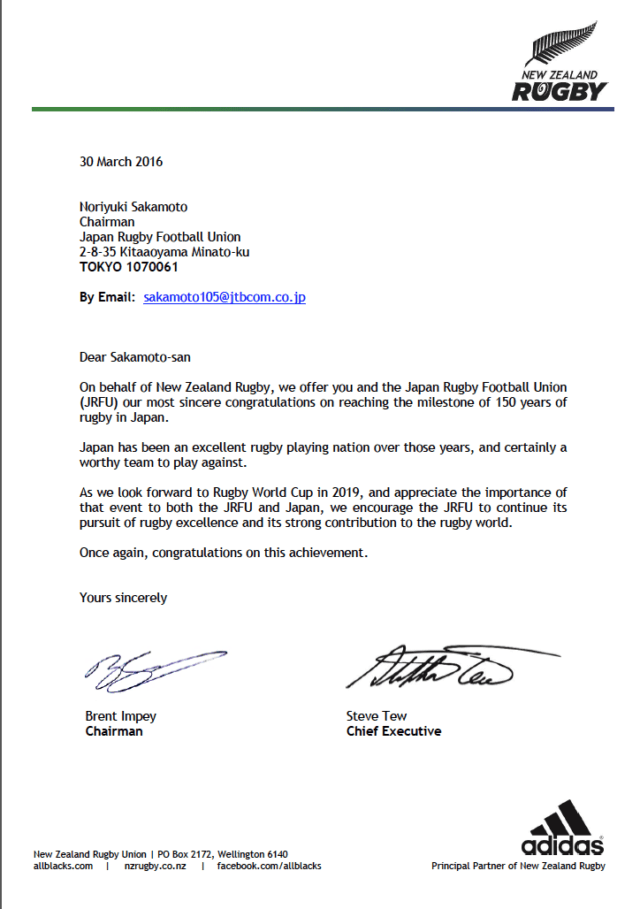