Several middle-aged gents were drinking cheap sake together in Ginza and chattering about rugby and the good old days before the war. All of them were well-known rugby players in their youth and the group focused on the late Mr. Tomoo Chiba, a Meiji university graduate who had been one of the stars of the first ever national team – the All Japan team that toured Canada in 1930. There was a Keio man present, Kohei Hiranuma, and a Waseda man, Shigeki Nisshio. These three gentlemen had just attended some kind of public exercise gathering which was an initiative to encourage citizens to take exercise during those difficult times when all the sports facilities were in ruins.

They talked about playing rugby again and decided that they would gather their rugger friends and organize a team because they became certain that it could help them to find a meaning to their lives and give them the physical and mental strength to deal with the confusion surrounding them and to rebuild their lives. They also hoped their example might awaken the youth of the country to true liberty and peace, and show them how to build up their bodies and spirits in the hopeless disorder of the post-war period.

In January 1948 they held their first meeting attended by seven ruggers. Since they were all on the shady side of forty, they named their team the FuWaku Club after a Confucian saying: Forty is the age free from vacillation. The Japanese word “FuWaku” means “free from vacillation.” in Japanese. 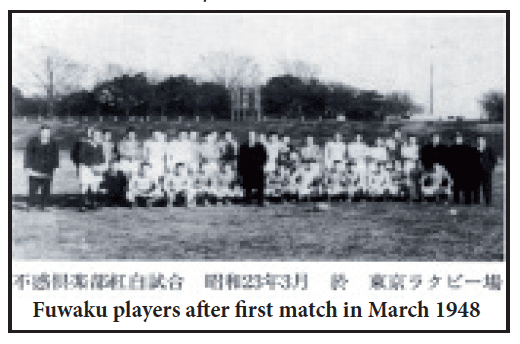 Tokyo Fuwaku was officially founded in March of 1948 after a game played at the Tokyo Rugby Ground where Chichibunomiya was later constructed. A few months later rugger men in Kansai (Western Japan) organized the Wak Wak Club, and in 1949 the MeiWaku Club was organized in Kyushu. They played their first three district inter-league matches in March 1952 at the Prince Chichibu Rugby Ground in Tokyo. Thereafter at least once a year they met together in Tokyo, Kyoto, Osaka or Fukuoka to compete on the rugby field and enjoy after-match functions, and the Fuwaku concept rapidly spread to all parts of Japan with each of the country’s currently 49 prefectures establishing their own clubs.

In May 1971 Fuwaku may their first overseas tour to Korea and that was followed one year later by a tour to Hong Kong and Taiwan. Rugby is not a very popular sport in Taiwan but there is a keen Fuwaku team there which often comes to Japan on short tours and plays against teams in the Fuwaku group.

A more significant event was the start of the Over 40 rugby concept in the west coast of Canada as a result of Fuwaku’s activities.

In 1971 a Canadian businessman called William Dunbar met up with some Fuwaku members during a business trip to Japan. As a result he not only introduced the concept of over 40s rugby to British Columbia when he returned home, but helped arrange the first overseas tour by a Fuwaku team (WakWak club of Osaka) which toured Canada in 1972. In 1974 a British Columbia over 40s rugby team toured Japan and in April 1975 a Tokyo Fuwaku tour group 100 strong played games in Canada.

Following up on this early enthusiasm, international over 40s rugby at club level has flourished between the two countries.

The first over-40 rugby club founded in British Columbia was the Whoi Whoi and soon after the Old Stylers, the Evergreens, Ebb Tide and Twilighter rugby clubs. As these clubs got larger they split even further to form even more over-40 rugby clubs and in 1991 the Pacific Northwest Over 40 Rugby Union covering teams from British Columbia, Washington and Oregon was established. There are currently 14 member rugby clubs with a regular league schedule and each year a number of rugby festivals catering to the various age groups of Over 40 / 50 / 60 / 70 + are held.

Over the years there has been a constant flow of rugby tours between the various Over – 40 rugby clubs of Japan and British Columbia.

Being a member of Fuwaku is demanding and games are played all the year round. The older they get, the more Fuwaku members are ready to dedicate more time to rugby and partying with their rugby mates. However, it is said that the numbers of players at the young end of the club – 40s and 50s – is declining while those in their seventies is growing. In recent years it has been possible to hold games with two full teams of over-80s playing. In April 2016 such a game was played at Hanazono Stadium in Osaka during the Sanwaku Taikai which is an annual tournament involving Kanto, Kansai and Kyushu teams.

Fuwaku teams are always prominent in the bi-annual Golden Oldies Rugby Festivals held in different rugby-playing countries in the world. However, while being happy to interact with and play against teams of senior rugby players from around the world.  Usually, the oldest player attending the festival is Japanese and in the recent 2016 Golden Oldies Festival in Cardiff, Wales, the oldest participant was 86(?) year-old Mr. Sugimoto, a scrum-half who is an alumus of Rkkyo University. However, the way the games are played and refereed in Golden Oldies Festivals is not serious for any games for players over 50. Thus contrasts sharply with, for example, Fuwaku games for yellow-shorted over 70s in Japan where the games are competitive and players are expected to spend more time warming up than I did at my peak.

Just like with sports like with swimming, athletics, etc today in which there are competitive ‘world championships’ in all senior age groups, it is inevitable that such world tournaments will be held in the future.  As a warm-up event just prior to RWC 2019 I think that Fuwaku, the world’s pioneer of senior rugby, should take the initiative and try to establish senior rugby worlds cup tournaments for 40s, 50s, 60s and 70s age groups based on the formats they have been employing in Japan for decades.